April 20, 2019, marks the 20th anniversary of the Columbine High School shooting; a tragic event that, at the time, was the deadliest high school shooting in U.S. history.

As the years marched on since that horrific day, memories for on the outside looking in may have faded a little, but those who were caught in the crosshairs of two vengeful teenage shooters, every day the struggle is still real.

On April 20, 1999, twelve students and a teacher were killed by two gunmen — students at the school — before the two teens committed suicide in the school library. An additional 24 people were wounded. One of the wounded in the school’s library was Kacey Ruegsegger. Eight minutes was all it took to change one shy teenager’s life forever.

Now, as a wife, mother, and mentor for other trauma survivors, Johnson has spent nearly two decades coming to terms with the haunting reality of that brutal day. In her non-fiction memoir, Over My Shoulder, Kacey shares details of her long journey to healing her mind, body, and spirit, marrying the love of her life, and navigating PTSD during motherhood. Her gripping and heartfelt retelling of that day in 1999 and the painful medical reconstructions of her body that followed is a testament as to how others can become the victor instead of the victim. 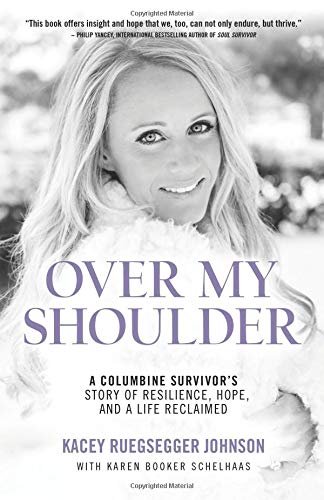 I had the honor of working with Kacey in prep for the release of this book and I am in awe of her determination, strength, and unwavering faith. I want everyone who reads this moving book to know that, Kacey is a true introvert. She had to dig deep to find the courage to not only write this book but also put herself “out there” in the public eye. Something that (like me) she is not fond of, but knows that her story needs to be heard.

Kacey is also the mother of four of the cutest kids you will ever see. As I spoke to her on the phone, my burning question to her was, how do you do it? How do you send your own kids to school and not be paralyzed with fear?

The question is a common one and Kacey shared that she had decided early on in her motherhood journey that she would not make her deep fear and PTSD part of her children’s legacy.

I also asked her what was the inspiration was for the Over My Shoulder book title. Kacey shared with me that the title has multiple meanings. In the throes of the vicious attack in the Columbine High School library, she revealed there was a moment when she knew one of the shooters, Eric Harris, was coming towards her, shooting the students who were cowering under tables with shotgun blasts as he walked. Looking over her shoulder briefly, Johnson saw Harris heading towards her and knew that being shot was inevitable.

“But in the midst of terrifying realization, I felt a hand on my back,” Johnson recalled. “I remember wondering who would put themselves at risk to comfort me in the middle of gunfire. But when I looked over my shoulder, no one was there. At that moment, I just felt a complete calm come over me. I didn’t know if I was going to die, but it didn’t matter because that angel who was with me completely put me at peace. That was the second time in those terrifying eight minutes when ‘over my shoulder’ had a profound meaning.”

In my own opinion, Over My Shoulder is deep…in a very good way. It’s a book I plan to read again. Kacey has an amazing way with words and is an exceptional writer. The very first chapter is a minute-by-minute retelling of her terrifying moments in the school library as Harris and Klebold did unspeakable things to innocent kids.

I may have been home, but our family was still living in the smoky haze of the Columbine bomb. The air wouldn’t clear for a long time, as hard as we tried to blow it far, far away.

Another thing that will surprise readers is that Kacey’s personal trauma started a year before the Columbine shooting and she had transferred there only a handful of months before the shooting occurred. In a nutshell; Kacey story is profound, moving, inspiring, and filled with HOPE.

“Deciding how our traumas dictate our life is a choice,” Kacey noted. “I look back on my life, and I now can see that every difficult time I endured prepared me for the next. Life after a painful event is not an easy path to walk, but I want others who find themselves lost and hurting to know that it is possible to shift from victim to victor. I also want others with disabilities to know that life doesn’t have to be limited just because they are differently-abled. These life-changing events do not define us, but they can shape who we are in a positive way if we choose.”

“For any struggling adolescent, for any distraught parent, for anyone who has endured trauma or grief–in other words, for any of us–this book offers insight and hope that we, too, can not only endure but thrive.” Amazon Review.

I highly recommend Kacey’s book. It’s filled with wisdom, messages of hope, and the raw real-ness of what mothering and navigating life with PTSD and a physical disability is like. You can grab your copy on Amazon or on Kacey’s website here.

Wife, mother, spokesperson for the importance of tissue donation, and Columbine High School shooting survivor, Kacey Ruegsegger Johnson has spent nearly two decades coming to terms with the haunting reality of April 20, 1999.  Her journey to healing, the truth, and wisdom that comes along with navigating PTSD during motherhood, and how others can “survive to thrive” are shared within the pages of her new book, Over My Shoulder.

As the 20th anniversary of Columbine High School shooting nears, Johnson is more determined than ever to use her turbulent journey of healing and awareness to help others make the choice as to how their past traumas will influence their future life. When not speaking publicly about her journey of healing or mentoring other trauma survivors, Johnson can be found cherishing a “new normal” with husband Patrick and their four children in the beautiful state of North Carolina.

Previous Post: « How to Sell Your Adult Coloring Pages on Amazon
Next Post: What do I want to be When I Grow up? (Answer: An AUTHOR) »