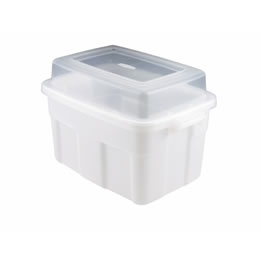 Day #4 of my Spring Cleaning Party and I am starting to get concerned about my spousal unit. I think he may…dare I say it?..have a..*gasp*..CONTAINER FETISH.
Don’t laugh (ok, go ahead and laugh a little)….it’s a serious problem that is spiraling out of control.
My concern escalated when I saw him fish the plastic cup that comes with a Pepto bottle out of the recycle bin (he claimed it was to measure chainsaw oil…but I am beginning to wonder). The day before that I saw him get positively giddy over a clean peanut butter jar with a screw top. The main thing I want to know is, where did it come from and who was the dumb a$$ crazy enough to even WASH a peanut butter jar? Deeply disturbed I ventured into his garage (The Man Cave) and to my dismay, I was met by a 6 foot tower of plastic coffee cans with lids. Nestled up next to them was a crapload of cool whip containers and even an ice cream pail or two. Stop the madness! Who is this man??!!
I would have taken pictures, but the images would have been just too disturbing. Quickly I gathered my wits and did an intervention. I confronted him on this unsettling (& space wasting) development. And what was his solution? He went to the Big Bloated Chain Store and bought a Rubbermaid Tote to hide all his treasures in. Oi. Anybody got a connection for a 12 step program for container addiction??
Please share!