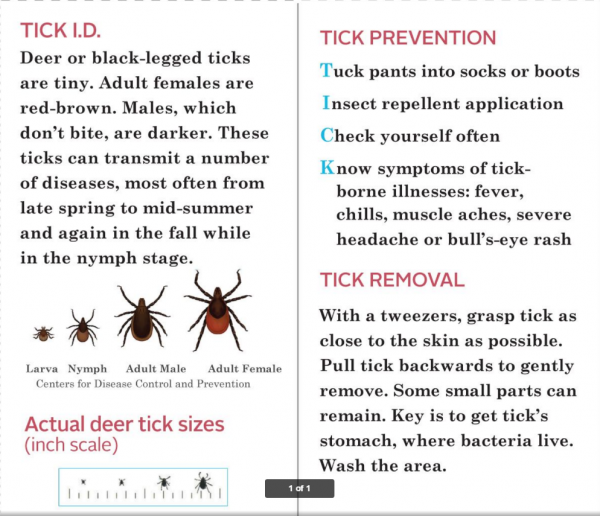 {shared with permission from Essentia Health of Brainerd, MN}

Tiny ticks are becoming a big problem in the Brainerd Lakes area. A growing number of people are getting sick from diseases carried by the black-legged tick, commonly known as a deer tick.

Lyme disease is the most common tick-borne illness in Minnesota and Wisconsin so that’s the one everyone thinks about first, says Dr. Kevin Stephan, an Essentia Health infectious disease specialist. But ticks also spread anaplasmosis, ehrlichiosis and babesiosis, a parasite that infects red blood cells.

Adult deer ticks are tiny – about the size of a sesame seed. That’s why many people don’t realize they’ve been bitten until they have symptoms.

Prevention is key, says Dr. Stephan, who reminds you to do a thorough check of your body after being outdoors. Your risk is greatest from late spring through mid-summer, when ticks are most active. Ticks are active again in fall. Treat your skin with a repellant that includes DEET and your clothing with permithrin, which is available at sporting goods stores, he advises.

Tick-borne illnesses can range from mild to severe. Fever often brings people to the doctor. Other symptoms feel like the flu, such as severe body aches and headaches.

All four tick-borne diseases are easily treated, Dr. Stephan says, but Lyme disease can have lasting effects if it’s not caught early.

According to the Centers for Disease Control and Prevention deer or black-legged ticks are tiny. Adult females are red-brown. Males, which don’t bite, are darker. These ticks can transmit a number of diseases, most often from late spring to mid-summer and again in the fall while in the nymph stage.

With a tweezers, grasp tick as close to the skin as possible. Pull tick backwards to gently remove. Some small parts can remain. Key is to get tick’s stomach, where bacteria live. Wash the area.