I have the COOLEST friends. For realz

One such friend is the crazy-talented Hannah Rials.  I’ve known young Miss Hannah for a few years and it blows my mind that she has TWO successful and award-winning YA books to her credit…and she’s just barely 21. 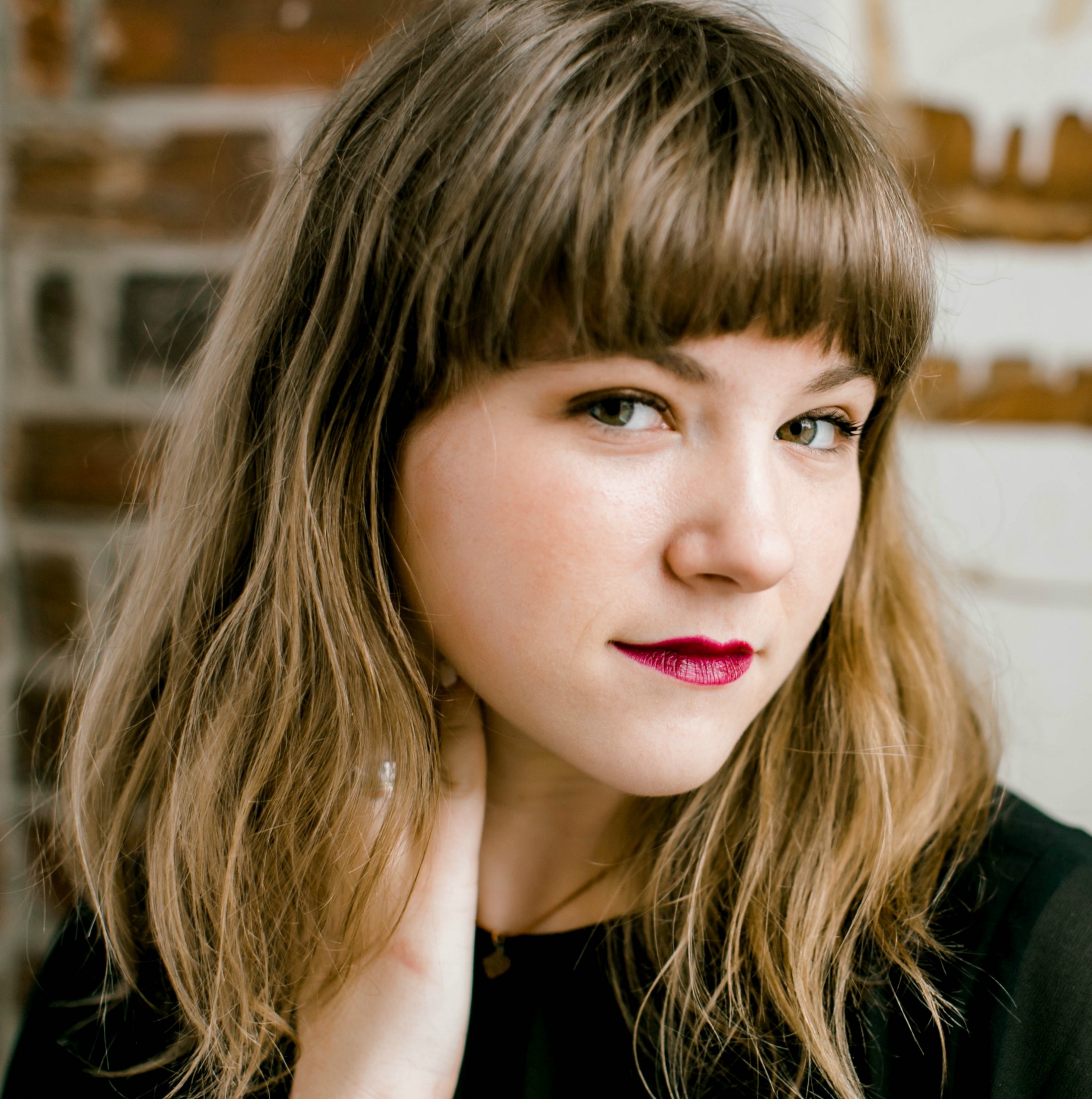 When her first book, Ascension, was published by Aletha Press, I was mesmerized by the story and quality of writing from Hannah. No small statement since YA vampire thriller/romance is not typically the type of book I would read.

THEN, book Book #2 in the Ascension Trilogy, Clandestine, came out in July which was a good thing since I was about wetting myself with anticipation after the cliffhanger ending of Ascension. Clandestine, published July 18, 2018, continues the intense journey of Deuxsang teen vampire, Cheyenne Lane. 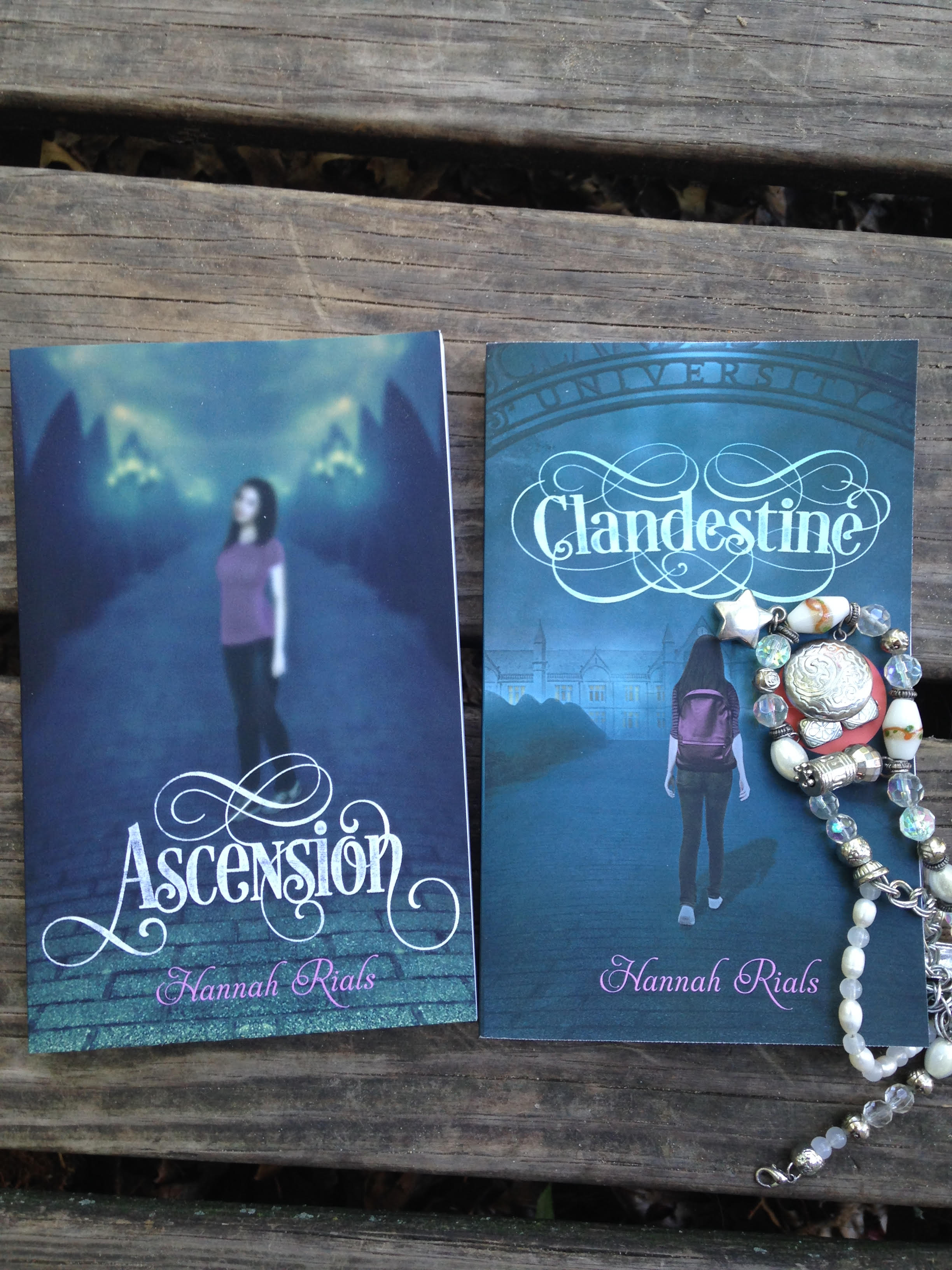 It did not disappoint and I am stifling the urge to read it AGAIN.

Cheyenne Lane never believed it could come to this—imprisoned by her own family, who are plotting to overthrow the Vampire Council. Ripped away from the happiness of her summer romance and friendship in New Orleans, Cheyenne is forced to begin her education at Clandestine, the secret Deuxsang University, one year early.

She is guarded constantly, separated from her best friend Anne, and desperate for any word from Eli and the witches. Meanwhile, her cousin Lilith has discovered that Cheyenne possesses all four vampiric abilities—unheard of for a Deuxsang—and intends to use her in the Ascending’s rebellious scheme.

At 17, Cheyenne finds herself the center of a centuries-old conspiracy involving the vampires, Deuxsang, and witches, and everyone is telling her who she should trust and what she should do. Her head is too full of voices and opinions, and it’s time for Cheyenne to make up her own mind. 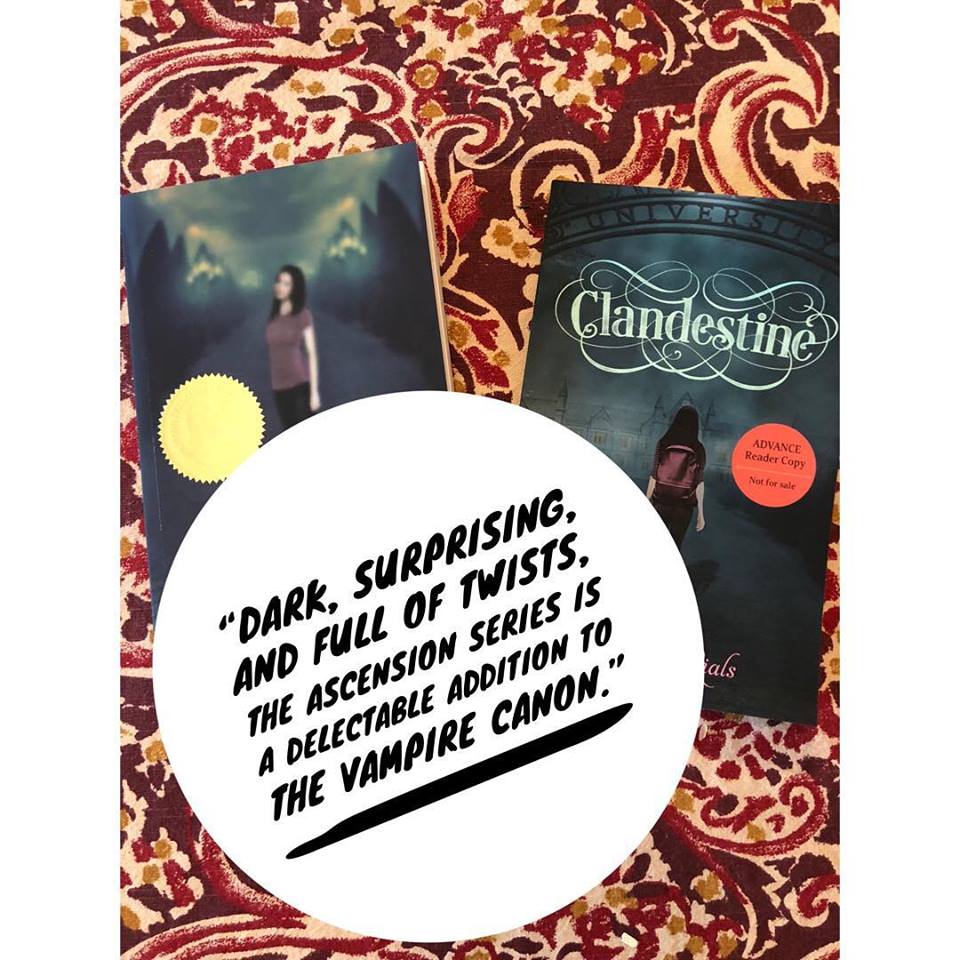 Is she ready to step into the role she was made for? Who can she trust? Who is her friend and who is her enemy? Is she really a born leader? All questions that only she can answer. As the information and scenario gets more confusing, she knows she must listen to her intuition if she is going to shift the truth from all the lies.

Prisoners. Me. Anne. We’re actually prisoners. Held captive by our own families. For our own good? My brain’s still having a hard time processing all this insanity, and we’ve been trapped in here for a week now. No word from Eli or Mason, or even my parents, who apparently support this. I keep asking myself how they can let this happen, how no one is speaking up against this, and I can’t come up with a good answer. This is all ridiculous, even for my parents, who I can’t begin to understand. To let their psychotic niece imprison their youngest daughter in order to “fix her” based off some insane plan to overthrow the vampires?

Are they so desperate for me to be normal that it’s come to this? I glance at Anne sitting at her desk. She hasn’t really spoken much since we have expended all of our escape possibilities. We’ve failed so many times, but not for lack of trying. Thomas is just too paranoid and thinks too far ahead. Deuxsang are highly discouraged from practicing our abilities on our own kind, but desperate times call for desperate measures. I tried compelling our guards—and I somehow succeeded without any training whatsoever— but we didn’t even make it to the stairs before Thomas stopped us.

Anne tried dreamwalking, searching for Mason or Eli or anyone, but we learned that it’s a lot more complicated than it sounds. You just think of someone, see their dream, and slip right in, right? Wrong. Anne got shoved out of so many dreams, and she couldn’t even find Mason. She ended up with a migraine that made her throw up all over the place for a couple days. I really didn’t want to try inflicting, but seeing Anne so sick, paired with my own desperation, made me get over it.

Plus, it was kind of fun to see the guards weak.

That was the closest we came to being free. I had all of our guards crying out on their knees, wishing for release. I made myself sick to my stomach. I had my hand on the front door, when all of a sudden, we were both knocked to the ground. My eyes went black when my head cracked against the cold tile of the Lacroix’s foyer. We didn’t even see who hauled us back upstairs and locked us in our impassable tower. Ever since then, Anne hasn’t said much to me.

It’s been three days, and I’m going mad. I’m normally the one telling her to shut up, but now I can barely get a syllable out of her. It’s like she’s broken. And I get it, I guess. This is all falls back on me. My cousin is the one with the insane, suicidal plan; my family is the one keeping us here. I’m the one they need to “fix.” My boyfriend…ex-boyfriend…is the one who got himself kidnapped. If it weren’t for being friends with me, she’d be cuddled up in some jazz club, listening to Monde Musique and staring all moon-eyed at Mason. Life would be normal.

Well, as normal as a rule-breaking Deuxsang can get.

And now she knows the truth about her brother— that he was different, like me, and the Council took him for it. Now he’s probably dead. Her parents let it happen, but what’s worse, they lied to her about it. How could they do that to her? How could anyone do that? I saw a piece of her break when her mom finally told her the truth. She can’t look at either of her parents now. Again, that’s my fault. 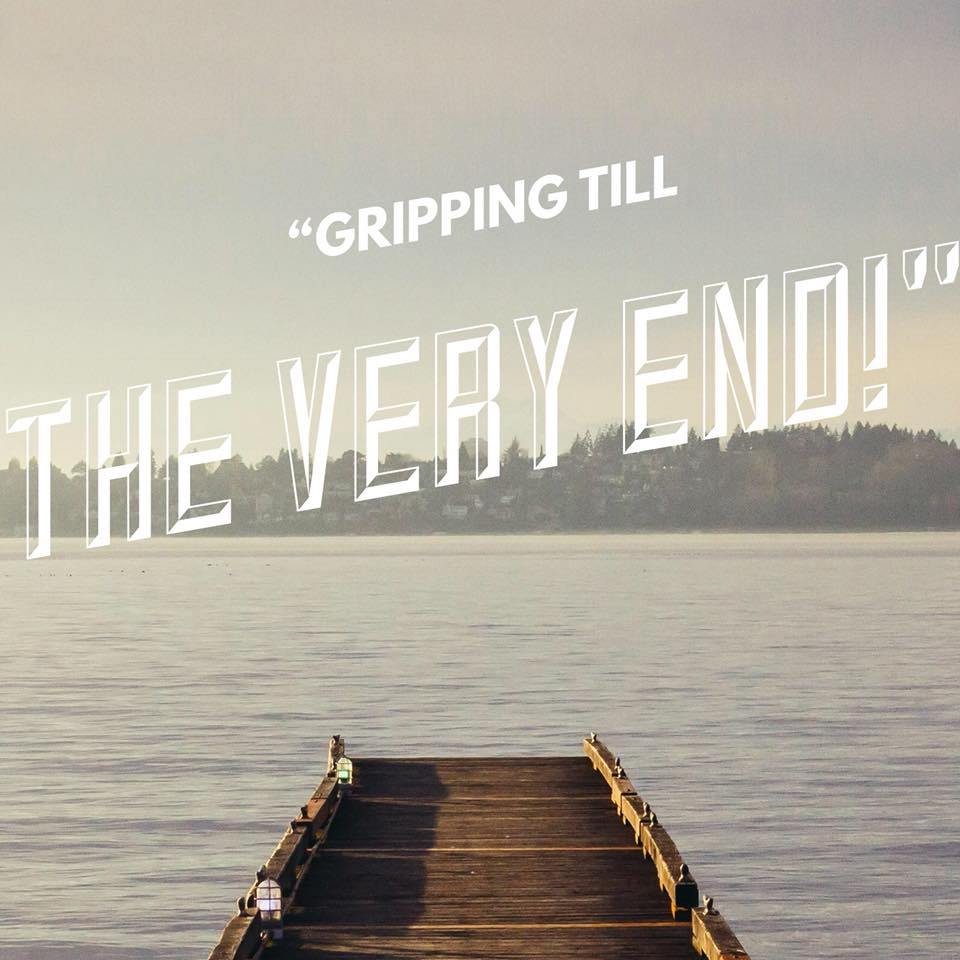 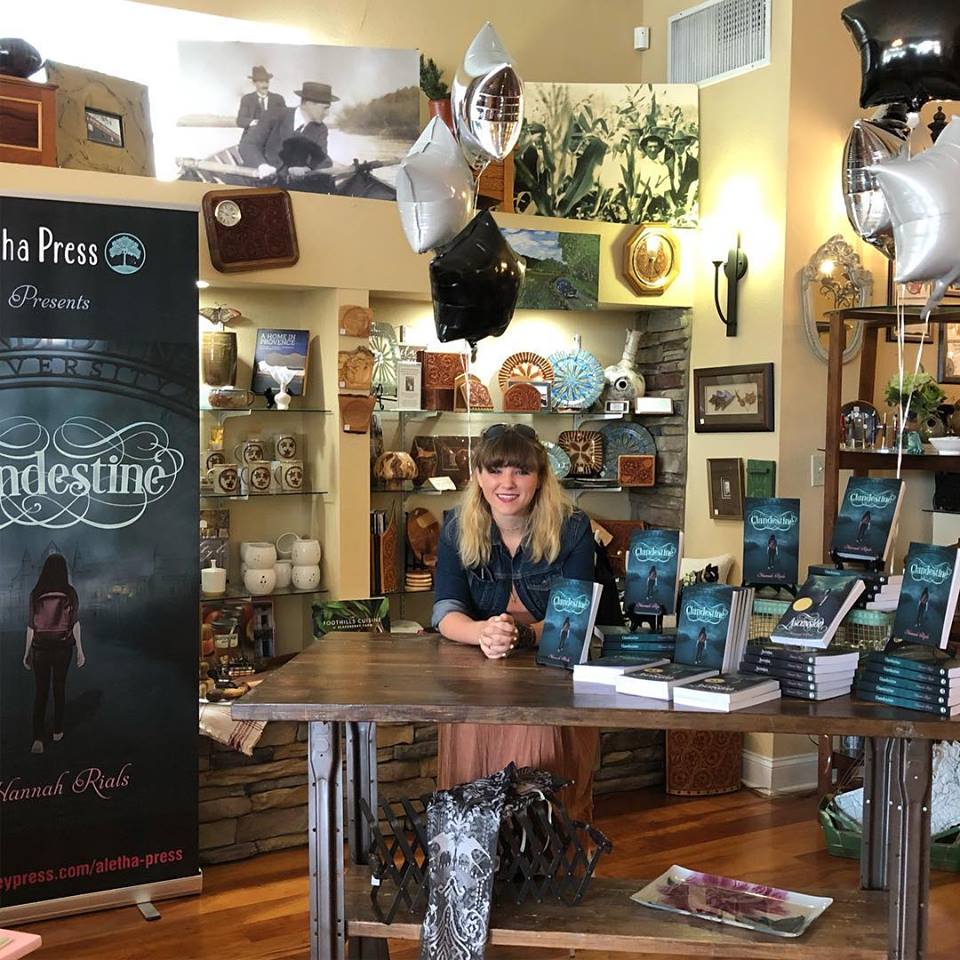 As Maryville native and a senior in college at University of Tennessee at Chattanooga, Hannah Rials began writing her first novel, Ascension, at age twelve. Her first YA novel Ascension is a modern-day teenage romance filled with “double-blooded” vampires and revenge-seeking witches. Published by Aletha Press of Maryville, TN is the second book in the trilogy, Clandestine, was written and editing while she was a full-time college student. After graduating from University of Tennessee at Chattanooga with a BA in Creative Writing, she will be attending college at Bath Spa University’s MA (England): Creative Writing for Young People; a yearlong master’s degree.

Hannah is a vampire fanatic, a New Orleans lover, and a dog obsessor. She loves her friends, family, and finding new adventures. To keep up with Hannah, you can find plenty of pictures of her corgi Buddy and her travels on Instagram @herials because who doesn’t love a cute corgi picture?  Connect with Hannah on Facebook, Twitter and via her website.

“I feel like I am living proof that dreams do come true.”– Hannah Rials