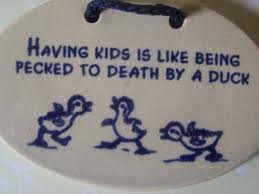 I came across this post from March of 2009 the other day, and I just had to chuckle.

Chuckle for a variety of reason.

Number One, because we all know how the whole Jon & Kate Plus Eight train wreck saga played out and how hubby Jon ended up being a dirtbag hobag less than stellar Role Model.

Also how, almost exactly two years later, not much has changed in my life.

And I am OK with that.

Here’s the post:
As everyone knows, I am a big fan of Jon & Kate Plus Eight…but I have to admit I tend to hear more of Jon & Kate’s show rather actually watch. But with whining aside, I have to share a comment that Jon recently made that made me stop in my tracks.

“Parenthood is like getting pecked to death by a duck”.

YES…YES that’s it! I’ve always wanted to put a single sentence description to this dance we all call parenthood. Now this comment sounds a little negative, but I love it because it is beautifully descriptive. Having little kids is very similar to having someone (a two foot tall someone)follow you around the bulk of the day, repetitively, verbally,  poking you in the side and saying “Mom?….Mom?… Mom?” Like being pecked by a duck .

Now don’t get me wrong, I would die for my kids. And I would go without sleep the rest of my life just to never feel the ache of childlessness again. But at work, people listen to me, value my opinion, and steer clear when I am PMSing.

My kids, however, sense tiredness or crabbiness like a shark senses blood. Once they are on my “scent trail of near insanity”, 99.9% of the time they kick it up a notch about the time I want to come home, kick off my shoes, and just dissolve into a puddle in my favorite chair. I also believe they have some sort of toddler/kindergartener mental telepathy going on to unionize their efforts to pull me in two different directions. It never fails, about the time Sara decides to get stuck behind the couch for the 450th time, Jake is bellowing cuz he’s taken a dump the size of city block and clogged the toilet…again ( to get the full scope of my son’s toilet habits, scroll back to my old post archives and read The Legend of The Poop Knife).

In short, I figure there will be no breaks or slack allowed until they are about 30 and can wipe their own butts and make their own sandwiches. I report all this to you as I sit on my cluttered couch watching my daughter remove her diaper for the second time. At this same moment, my son sits one inch from me, repeatedly pretend-biting me in the head with his favorite T-Rex. Again…and again..and again.

BUT..I wouldn’t have it any other way. Look for me in about 45 years at the retirement home. I will be the one with the “duck dents” in my head, and swatting at imaginary attacking T-Rex’s…..

Another thing that bough this post to my attention was a recent, and oh-so-profound comment from Brian at Briantruisms.

Parenthood is a ride of sheer terror, punctuated by brief moments of pure joy.