As you may remember quite some time ago, we bought some pet fish.

They were meant to be “starter pets” for nagging children who were begging for a pet, yet could barely wipe their own butts.

We have since graduated to an furry puppy dog named Fred and three reptiles that we love dearly and care for easily. But there was a time when we were green as grass in the pet care department especially with something as wussy as FISH.

The following is a true story and testament as to the lengths us parents will do to keep the peace in the family abode. It’s also the “tail” of one of the biggest Epic Pet Fails this family…well…ME…has ever experienced. 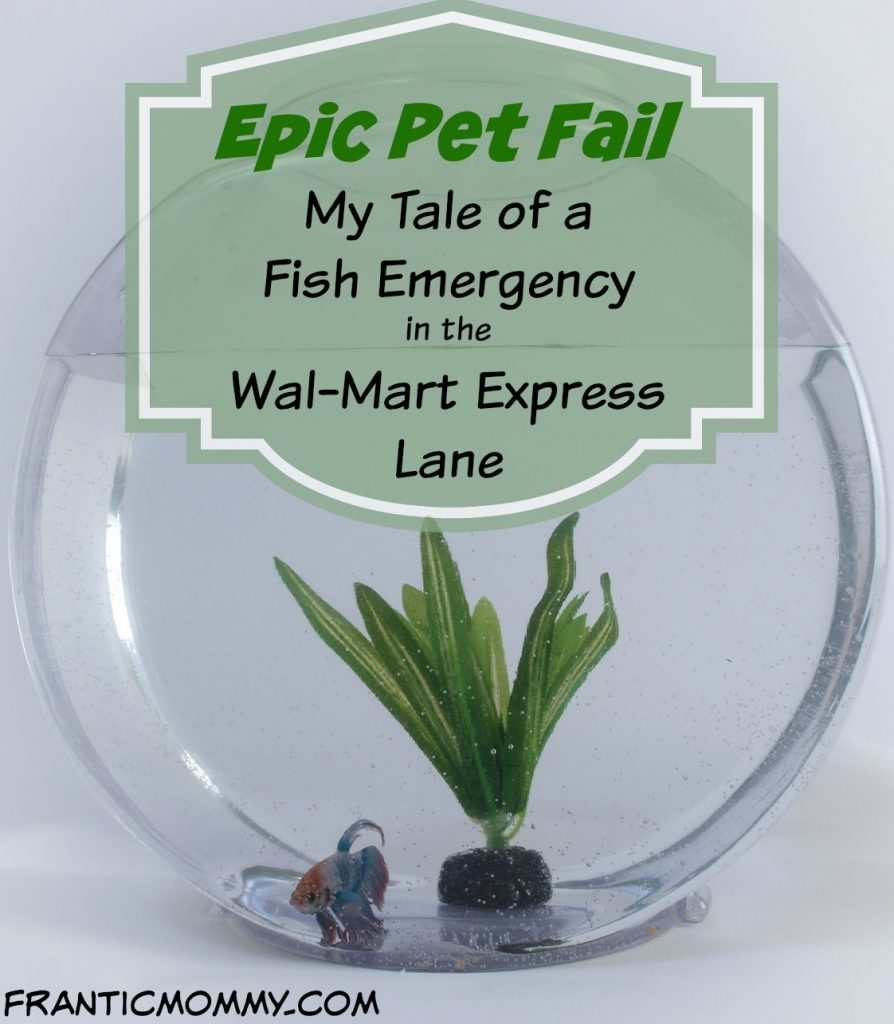 I kinda like them. They are easy to care for, don’t make a mess and don’t poop on my floor. However, there is just one problem. We’ve been through about 10 of the little buggers in 3 months. Obviously as fish owners…we suck.

My daycare lady just shakes her head at our fish follies. “Mine have been alive for years”, she says. “YEARS……” (which is code word for “dumba$$ you shouldn’t own fish. I should know. I care for your children…HELLO?!)

And the tears! Oh my goodness, the TEARS that are shed by a certain 6 year- old boy every time one of his fish Bites-The-Big-One. I was hoping the first fish burial at sea (flush) would be the hardest, but I can’t say it’s getting any easier.

Recently, this same 6 year old just left on weekend hunting trip with  Daddy. “Take care of my fish, Mommy”, he ordered as he trotted out of the house for the weekend.

I knew in that instant…I was DOOMED.

Sure as heck, the next morning ..we had a floater…an upside-down-dead-as-sh*t floater.

BUT..being the clever and resourceful Mommy that I am, I figured I’d pull a fast one on my little man. No sense ruining his trip by revealing someone had managed to kill off yet ANOTHER one of his beloved fish. Off to Wal-Mart I went.

Although I am NOT a big fan of Wally-World, I will have to say I get the best service from the Fish Dudes in that store.

I think they just feel sorry for me. Maybe because I am there with a bawling, heartbroken 6 year-old so much. I am waiting for them to offer me frequent flier miles. I arrive at Wal-mart in a head of steam on a Quest For Fish.

Ah-HA! There is ONE fish left that is right kind and size. Victory!

Sacked up and secure, I happily load my fish into my cart. I decide to treat myself to a bit-o-shopping, then head for the checkout line. I spy a lighted a “20 items or less” lane that is open and empty. ROCK ON. I pull in, smile politely at the cashier, and reach to pull my plump bag-o-water & fish from my cart..

Before you can say “gill plates,” my precious fish is falling towards the floor. THE FLOOR. It is the Sploosh Heard Around The World.

I am certain the scene that followed was probably captured on film, documented, and already gone viral on a “The People Of Wal-Mart” You Tube channel somewhere.

But in case you missed it, here’s a visual for ya; Picture a chubby 43 year old mother standing in the checkout line shrieking “HELP! FISH EMERGENCY! HELP!” And doing it in a pool of water the size of Lake Erie.

Desperate and panicked I scoop up my poor fish bare-handed and deposit him inside what’s left of his plastic bag (with about a teaspoons worth of water left).

No..it’s one of the Fish Dudes. I’m not sure what caught his attention. I’m thinking it was either my hysteric cries for help or the onslaught of water that’s creeping across the floor.

Leaping into action, he seizes what’s left of my water bag and fish and begins to sprint back toward the Fish Department with me shouting at the back of his head, “whatever you do…I NEED THAT FISH!”

Minutes later he returns with my precious (and still breathing) fish in a fresh bag of water. His face flushed and proud. He rocks. He is my new hero.

Relieved, I contemplate giving him a Frenchy.

Fish safely secure-in-bag, I am now thoroughly flustered and embarrassed. I pay for Robo-Fish and the cashier giggles and comments “that is one tough fish.”

Days later, Beloved Son arrives home from his trip and immediately runs to greet his fish. After a few moment he gets very quiet.  “Hey Mom,” he chirps, “You know my black fat fish? He looks…weird“.

My heart stops and my pits get sweaty. Keeping my wits about me, I press for details.

“Well…he’s got this weird mark on his side. You know…like a scrape. I wonder what it is…?”

Road rash, I think silently to myself. It’s frickin road rash. That is one tough fish.