Have you asked yourself this before? Many of us with slow cookers have eyeballed recipes and wondered if we could cook them in our crockpot. Often, you can.

Slow cookers, or “crockpots,” are a wonderful way to have food “cook itself.” If you’re not used to using one, knowing some tips and tricks ahead of time can help reduce the learning curve. Even if you do use your slow cooker frequently, it’s nice to expand your recipe repertoire and learn something new about this standby of busy kitchens.

People may think I am nuts because I “sit all day,” but once the end of my workday is done (around 3:30) my grey matter is DONE. Like, stick-a-fork-in-it DONE.  And when I tried to muster up a few more brain cells to come up with an idea for supper, that’s the night we eat not-so-heathy things that come out of a box or involve a microwave. #EpicMomFail.

That is yet another reason my crockpot is my BFF. Around noon when I am still somewhat functioning at a normal level, I can quickly pull together a recipe I scoped out the night before, throw it in the slow cooker, set, and forget. #EpicMomWin. Time to start your own Crockpot Revisited Project.

But before you just throw everything into the slow cooker and hope for the best, there are some general principles you should consider as you adapt your favorite recipes for the slow cooker.

In most slow cookers, “Low” is around 200 degrees F, and “High” is about 300. Cooking takes about twice as long on Low as it does on High.

Slow cookers produce very moist heat. This means your recipe will retain more moisture than it would if it were baked in the oven. So a good rule of thumb is to reduce the amount of liquid in your recipe by about half. However, if you’re cooking rice or some other grain, then you should use an amount of liquid that is just shy of the standard amount.

Here is a handy guide for oven times converted to slow cooker times:

4. Know What Holds Up

Roasts, brisket, and flat steak stand up well to long cooking, usually requiring 10 to 12 hours on Low or 6 to 8 on High. But vegetables don’t usually hold up so well, especially ones like snow peas and broccoli.

If you want to adapt a meat recipe that has vegetables in it, you can add them toward the end of cooking time. However, if you combine meat and chopped vegetables that are more dense, like chunked carrots and potatoes, then you can usually cook the whole dish for 8 to 10 hours on Low.

Poultry cooks more quickly than red meat, and fish cooks faster than both.

I also found this awesome batch of 20 Crock Pot Soup Ideas over at I Should Be Mopping The Floor. Check it out HERE.

Be sure and check out the other posts in this series!

Crockpot Revisited: Adapting Your Favorite Recipes for the Slow Cooker 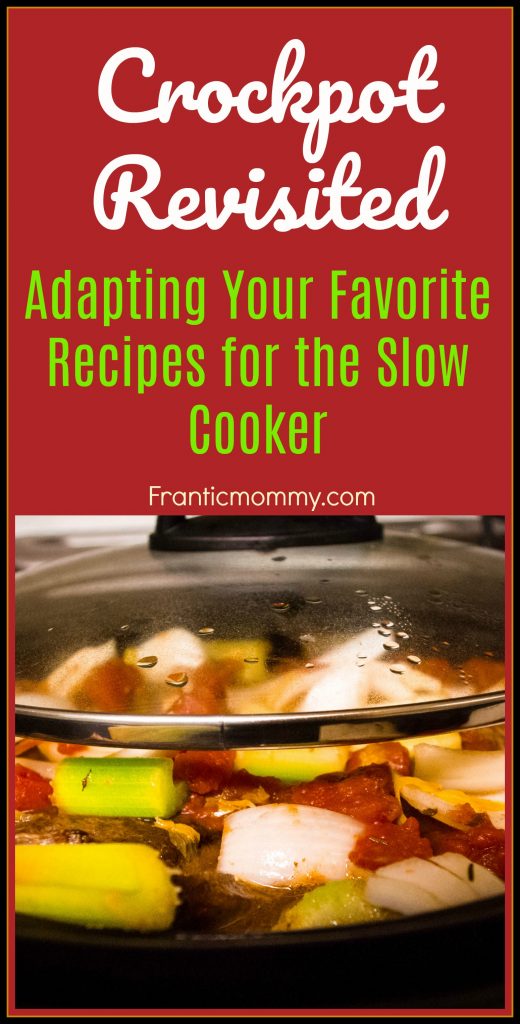 Previous Post: « 4 Quick Ways to Save Every Month-Guest Post from Shannon Medisky
Next Post: WAHM Tip Thursday-Work at Home Options – Choosing the Right Idea for You »