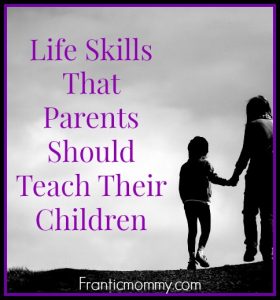 It goes without saying that parents want the best for their kids. Since nobody’s perfect, though, it’s impossible to arm children with each and every skill they’ll need. Aside from teaching a child how to ride a bike or play an instrument, these life skills are ones that every growing child should learn.

The more a child reads and learns, the more broad their knowledge base will become. Their mind will be open to a range of possibilities. As they get older, they’ll also find it’s easier to communicate with people when they know about a lot of things. Aside from reading, encourage your children to learn in other ways. Bring them to museums, watch interesting movies with them, and expose them to a range of music.

2. Play well with others.

In today’s world, there’s a heavy value placed on accepting others, differences and all. Encourage your kids to team up with children who are different from them. It’s important for kids to learn how to work with others toward the same goal. Instill tolerance in your kids, along with empathy for other people’s viewpoints and feelings.

It’s completely natural to disagree with other people. Problems arise when those disagreements aren’t handled amicably. Teach your children to stay calm during disagreements and when confronted. From deep breathing exercises to weighing both sides of a problem, kids should be armed with the ability to handle problems and they should learn how to control their emotions.

4. Let your voice be heard.

As a parent, you’re always there to protect your children. When you’re not present and able to defend them, though, it’s important that they know how to defend themselves. Teach them to speak what’s on their mind, respectfully but boldly. Not only will your kids respect themselves, but they’ll become leaders who can pave the way when necessary.

5. Apologize after making a mistake.

Everyone makes mistakes, including your children. Owning up to the mistake and facing the consequences is a valuable life lesson. There’s nothing wrong with asking for forgiveness. Plus, when a child can accept their own mistakes, they’ll find it easier to forgive others, too. Additionally, encourage children to move past wrongdoings, both their own and those of others. It’s never good to dwell on a mistake after you’ve admitted to it.

The goal is to raise your kids well. You won’t get everything right along the way, but try your best to prepare them with basic life skills. Click here for more help with parenting.